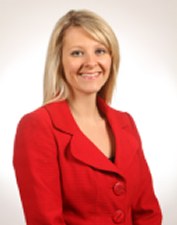 Emilie Oldknow: She allegedly said 'Who do I have to sleep with to get elected in my area?' at a Labour Party meeting, and Jonathan Ashworth held up his hand.

It seems that I have to remove the image of my MP that I have had on my dartboard for the past decade and replace it. No, the election hasn't come early to my neck of the woods, rather the boundary commission has decided to move me into another region.

My 'new' region is still a Labour safe seat and although the MP is standing down, another candidate has been parachuted in – Emilie Oldknow.

Available in any colour, as long as its black

Oldknow was selected from a list of women only candidates. Now, I have nothing against voting for women (I voted for Thatcher), but I despise being forced to only vote for women, merely because they are women and are needed to make up the numbers in Parliament. It wasn't a case that the two best canidates for Labour were women, it was a case that the only candidates that Labour would select in my region were women.

Purely on the basis that my choice has been removed from me, I would never vote for Emilie Oldknow. Such actions are a first step on a slippery slope, what next, only being allowed to vote for Blair/Brown cronies?

Chris Leslie: Another Brown crony, who masterminded his 2007 leadership campaign, has been parachuted into Nottingham East safe seat after being personally selected by Brown.

Well it seems that Emilie Oldknow ticks that box too. Oldknow just happens to be sharing a bed with Jonathan Ashworth, Brown's deputy political secretary. Even her opponent during selection pulled out citing cronyism and claiming that the selection process is basically a done deal.

I am inclined to believe her, how else, other than cronyism and positive discrimination, would a 29 year old who cannot even spell the name of her hometown and with no political experience become the candidate for my area?

It has also been noted that Oldknow, who used to work for the NHS, and her fiancée Ashworth, may have had quite a lot to do with the recent cancer leaflets, although Oldknow stated:

“I had not seen the mailshot before and it wasn’t sent out by my campaign,”

Thank you Brown, if I were beginning to forget why I will never vote Labour again for the rest of my life, and why I hate our current political system, you have reminded me.

This entry was posted in Blair, Britain, Brown, Government, MPs. Bookmark the permalink.