The Americas Kick Britain in the Teeth

What do the uncool kids do when they don't get to be leader? Create their own gang!

Latin American and Caribbean leaders at a summit in Mexico have unanimously backed Argentina in its new row with the UK over the Falkland Islands.

Once again Britain receives a kick in the teeth from the those that frequently seem to have their hand out demanding our aid. The annoying word here is unanimously. We have friends in that region, apparently.

Belize for example always cries out for British aid and has a British garrison permanently based there to protect the country should it’s neighbour Guatemala invade. Like Argentina with the Falklands, Guatemala has always claimed Belize as part of its own terrority and the only thing that has prevented it exercising it’s claim is the ever present British garrison.

If Belize does not support our sovereignty over the Falklands, maybe we should stop supporting their independence from Guatemala. Their independence is enforced by the British Tax payer and British soldiers, and their gratitude is overwhelming.

Then of course there are the Caribbean nations like Trinidad and Tobago, Jamaica, Bahamas and Barbados, all of whom receive generous aid from Britain each year.

They have all stuck up a collective two fingers at Britain and its claim on the Falklands, to appease the Argentines.

History of the Falklands 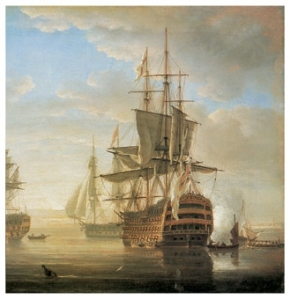 When Britannia Ruled the Waves: With 100 more ships than Argentina, Britain still does as far as they are concerned.

Despite the claims of the Argentinians and the Spanish, the Falklands were always British. Although sighted by many European sailors prior to this the Islands were first explored by John Davis in 1592. The French claimed and settled on East Island in 1764, the British claimed the other Islands and settled them in 1765. France handed over her settlement to the Spanish who then attacked the British settlement and drove out the British. A peace deal was reached in 1771 although neither relinquished their claims on their effective halves of the Islands.

Argentinian President looking for the perfect accessory - the Falklands

At no point did the British ever relinquish their claim to the Islands. The Argentinians also claim the South Georgia and South Sandwich Islands, both of which were discovered by James Cook in 1775, and neither of which have ever officially been occupied by the Argentinians.

Argentina has claimed the Falklands more or less since its independence in 1816, but the South Georgia and South Sandwich Island since the mid 20th century, and the whole of Africa and Antarctica since 2011. The Argentinians never drove the British from the Islands, and never got the British to relinquish their claim on the Islands.

Apart from the fact that none of Argentina’s claims have merit, the British allowed the Argentinian settlement to remain in 1833, and those descendent’s and subsequent settlers have made it categorically clear that they wish to remain part of Britain. A point which Argentina wishes to ignore.

However the real reason why Argentina wants the Islands is greed, pure and simple. There is oil, 60 billion barrels of the stuff and they want it and the reason for this is twofold. The first is obviously that they want the oil for themselves, there is thirty times more oil in the Falklands than in the whole of Argentina (and Britain), and Argentinian, and the whole South American dependence on oil is rising.

The second reason is that Argentina currently supplies the Falklands with all each energy needs and the Islands having their own energy is going to affect that.

Argentina know that militarily it has no chance against Britain, a lesson the Argentinians learnt the hard way last time. They are desperate, trying the UN repeatedly, despite having no case, begging Britain for talks on the Falklands, even though the British refuse, after all what is there to talk about? The Islanders want to remain British, they are British, there is nothing to discuss.

After facing a British bayonet charge, the Argentinian Falklands Veterans now have to face this at home trying to secure their pension rights. No way to treat veterans.

So in the end the Argies, and others with an axe to grind have created a little gang to back each others claims. This summit hasn’t just been a kick in the teeth to Britain, but the US and Canada too, the American nations have decided to set up another organisation, specifically omitting Canada and the US, so that they can pursue their anti-Anglo Saxon agenda.

I am sure that next they’ll back Argentina’s attempts to block shipping to the Falklands, probably by all blocking Falkland bound shipping.

It is sad and pathetic really, as I am sure that they’ll all be around the ankles of Britain, USA and Canada come donations time. They are also alienating three of their biggest export markets. If all three nations were to decide to cut any and all economic aid, or introduce their own trade embargo, the whole region will slide into recession.

There will only one set of winners in such an affair, and none of them will be the 32 nations at the Cancun summit.

This entry was posted in Argentina, Britain, Falklands, France, MoD. Bookmark the permalink.

8 responses to “The Americas Kick Britain in the Teeth”