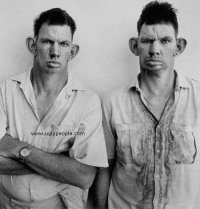 White Supremacists: Most likely only a danger to themselves.

A teenage boy and his father are being held under the Terrorism Act over a suspected Ricin poison plot by white supremacists.

Question is, how on earth did the police know that it was ricin in the jam jar without opening it? Personally if I am unsure what is in a jar, I open it and sniff.

Whilst I understand the seriousness of this case, I do think that the police may be building up their part just a tad.

Something tell me that the term World Wide may be a little bit of an exaggeration, what with whites themselves being ethnic minorities everywhere outside of Europe and North America.

International perhaps, but World Wide? I don’t think so.

That isn’t the end of the justification round however:

Durham’s assistant chief constable Mike Barton said: “This shows that the terrorist threat in the UK is real and present.’

Well, that makes all these years of anti-terror laws, after anti-terror laws, the evaporation of our civil liberties, the further encroachment of the police and state into our daily lives, the extensive databases of DNA and personal information, all worth it.

None of them were used in this investigation, the ricin was discovered by accident and the ‘real and present’ threat that it posed had been languishing in a kitchen cupboard for two years.

The fact is the police tripped over this ‘terror plot’ and couldn’t believe their luck. A pair of idiots had created ricin (no easy feat), perhaps plotting the rise of the white race over a pint or two, or in an armchair but just never figured out how to deliver, or, more likely, that they wanted to.

The pair of idiots are probably even now kicking themselves for not having gotten rid of it. Idiots they may be, but the best quote of this investigation again come from Mike Barton:

“White supremacists seem to hate an awful lot of people.”

Ethnic minorities, as the name suggests, are a minority of people, so it would be fair to say that the supremacists hate a lot less people than say, radical Muslims or the likes of Harriet Harman, Jacky Smith and Caroline Flint, who hate all men.

He added: “This will spawn an awful lot of intelligence which will then kick start other criminal counter terrorism inquiries elsewhere.”

Again demonstrating that the Police cannot believe their luck with having this fall into their lap!

As for the ricin itself, it is 6,000 times more powerful than cynaide, just an amount the size of a grain of salt is enough to kill an adult. A most potent and lethal substance.

“It was in a sealed jam jar that has been kept in a kitchen cupboard – apparently for up to two years.”

How are they still alive? What a bunch of half-wits!