The Man Who Would be King: Charles will take the salute

Prince Charles is to attend D-Day commemorations in Normandy at the weekend, Clarence House has confirmed.

Well, at least the Americans remember that we were there on those beaches, saving France.

Apparently the Americans were not too impressed that British and Canadian official representation would not be there either.

The White House had stepped into the row about why the Queen was not attending after Buckingham Palace insisted she had not been invited.

In all honesty this whole situation has started to make re-evaluate the mess, was it really the French refusing to allow the British there, or Brown not wanting anyone but him there.

Since then Brown seems to have been going out of his way to make sure that him, and only him, represents the UK. Our Head of State was not allowed. And despite the public outcry, he stuck to it. 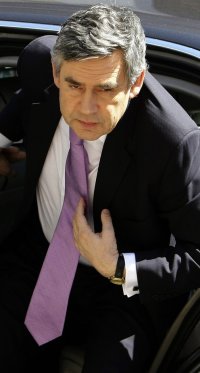 Borrowed Time: The people hate him, the Monarch hates him, his own cabinet hate him; yet he still clings on.

The French, who to be fair, may well have been caught in the middle of all this, have stated numerous times that they invited the British; and who the British decide to send is up to the British.

When Charles went over Brown’s head,  so to speak, direct to Sarkozy the French probably took what they saw as a quick way out of this mess and invited Charles directly.

Brown could have course have still have blocked it, but with the US President also asking questions and applying pressure,  it looks as though Brown was forced to relent. Good news all-round.

I would have preferred it if the Queen were there rather than Charles, who wasn’t born then and isn’t seen as ‘one of them’ by the veterans like the Queen is, but he’ll have to do.

This entry was posted in Britain, Brown, Government, Obama, US. Bookmark the permalink.