Kirkbride’s whole family on the make

Julie Kirkbride and her family enjoy the rewards of public office

I was starting to think that these revelations had run out of steam, but then more come along from this despicable woman.

Julie Kirkbride faces a ‘public execution’ after she was told to meet voters to explain claims that her brother and sister exploited her expenses.

Not content with giving her brother a home rent free, and then claiming back refurbishment costs from the taxpayer, she also employed her sister!

Plenty to go around

No one can claim that Julie Kirkbride is not generous, shame it isn’t her money.

The Tory MP paid her sister Karen Leadley £12,000 a year from public funds to be an ‘executive secretary’. Mrs Leadley works from her own home in Dorset – 141 miles from her sister’s Bromsgrove constituency and 107 miles from Westminster.

In this case it appears that ‘executive’ is a euphemism for not involving any actual work. To me, this looks like fraud, Kirkbride is claiming money for her sister under false pretences. Whether or not her sister received the money is irrelevant, she clearly was not entitled to claim it.

Her explanation leaves a lot to be desired:

My sister does work for me on a part-time salary of around £12,000. She lives in Wimborne, Dorset, but she has a computer which is networked to my constituency office and London office.

What on earth does she mean ‘networked’? She cannot seriously be saying that her sister’s computer is somehow linked into her constituency computer? And if she is, is that legal? Would not that give her ‘part-time’ sister  access to privileged information?

Or does the dozy mare actually mean by network – the internet? And that her sister can check her email from where she is? Either way this just seems to be another MP employing another family member in a very well paid but frivolous position.

Keeping it in the family

She doesn’t just pay her immediate family though, she also sets them up in business.

Once again her explanation for this is, quite frankly, bizarre.

‘I record my work as an MP in pictures. I often ask my brother to source IT equipment for me. These items were bought by my brother, on my instructions.’ 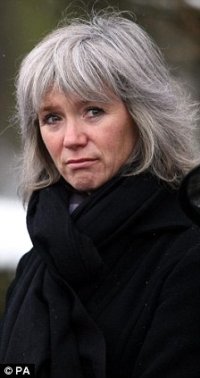 A pig with its snout in the trough

Now, I am no photography expert but routers? How do they fit into photography? And four? Surely just the one is enough? Not to mention five memory cards and three hard drives, that is one hell of a lot of storage space for a few pictures of her carrying out her duties as MP.

Which raises another point, if this equipment was to record her work in pictures, where are the pictures? There is a curious lack of them on her official website, despite the massive amount of storage space she could have saved them in. And if the pictures were not to be a publicly viewable record, why were we paying for them?

Besides does she really need some weird photographic record in order to do her job? I think not. If she wants to take happy snaps, she should do so on her own camera, on her own time and at her own expense. But I think it is clear that this equipment was for her brothers IT business, and not to record her work as an MP for posterity.

She has lied, cheated and milked the system and although it would seem an appropriate place for such a person, she has no place in the House of Parliament. She should face a fraud investigation, saying that she is going to stand down at the next election is not enough. That means that she gets another year of her £64,000 salary, not to mention the nice pension she gets and a ‘re-settlement’ allowance of about £30,000.

More infuriating of course, is the fact that she can still claim expenses that we are unlikely to know anything about, for the next year!

This woman and her husband should be in court, explaining to a Judge and a Jury why they made the claims that they did, not enjoying their ‘retirement’ at our considerable expense.

8 responses to “Kirkbride’s whole family on the make”