Britain’s first Muslim Minister, turns out to be quite expensive

There for the taking: Malik hasn’t let things like honesty, integrity or morality get in the way of his greed.

Shahid Malik, the Justice Minister exposed as the biggest expenses claimant of all MPs, was forced to step down today to await the outcome of an inquiry into his living costs.

Shahid Malik is not short on ambition. Not content with being the first Muslim Minister, he decided to go on to become the worst swindler out of 646 self-serving, corrupt, deceivers; which is no mean feat.

Only sorry to be caught

Malik refused to even apologise for his extravagant ways, instead promising to give the money taxpayers unknowingly gave him for his new entertainment system to a local charity. No doubt this charity would be run by a certain Mr. Tahir Zaman, who just happens to be Malik’s landlord, neighbour and friend.

It appears that like Malik, Zaman is also living the life of Riley at the taxpayers expense, all thanks to Shahid Malik’s generosity with our money. Malik seems to be under the impression that once elected, he need never pay for anything again; little wonder then that he is Britain’s most expensive MP.

The man even had the cheek to claim back a £65 fine for non-payment of council tax on his expenses, and was granted it! A £730 massage chair, because apparently he is unable to do his job without it, and a £2000+ television were just a couple of the other expenses we know about.

Shahid Malik has been costing the taxpayers almost half a million pounds a year since he was elected.

What’s all this then? 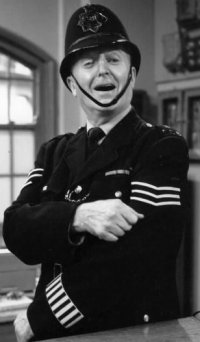 Policeman: Many years ago they used to be used to combat crime; today they are Government enforcers

At last the ‘Plod’, as Boris Johnson calls them, are going to investigate this whole mess.

a panel of senior Scotland Yard officers and prosecutors will meet next week to decide what action to take over claims MPs misused expenses. Officials will assess whether criminal inquiries are necessary in the aftermath of the scandal.

I am surprised that they have to meet to discuss it, surely this is a sure-fire way of hitting those performance targets; there must be at least 600 odd fraudsters within that House.

It will be interesting to see Shahid Malik in court trying this defence with a Judge:

“I have absolutely nothing to apologise for. I have done nothing wrong,” he told the BBC. “I have not been at the periphery of the rules. I haven’t abused the rules, I have been absolutely at the core of the rules.” 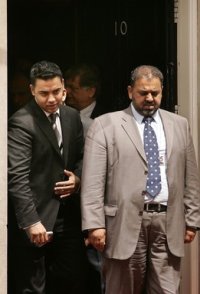 Lord Ahmed and Shahid Malik: Malik may follow his rotund friend into prison, if there is any Justice for the Justice Minister

He may change his story when he has to produce all of his receipts, and not just the ones we know about.

We’ll see what the police and potentially a judge make of his claims, for starters they should investigate his relationship with Tahir Zaman.

Fraud covers a lot of things; failing to disclose information, abuse of position, and false representation; the fact that he’s an MP pretty much guarantees that he is guilty of all three.

Malik though, has an excuse for everything.

I rang the Fees Office and asked if there was a limit to what I could spend before I bought a TV and they said. ‘No’.

Normal people tend to call their limit – what they can afford. Someone who earns £100,000+ a year can more than afford to purchase his own TV.

I did think at the time that was madness.

But he still went out and bought the most expensive TV he could find anyway?

I’m not in it to make money, I’m here to make a difference.

It’s funny how all MPs seem to say the same, yet then they have us furnish their homes, pay for their luxuries and constantly demand inflation busting pay rises to compensate for their hardwork. So much for serving the community and community spirit.

Surely Shahid Malik can understand why people think he may be out to make a fortune from being an MP? After all, normal people aren’t able to pay off their mortgage in three years, like Malik apparently did. Malik’s father was also a politician, so more than likely Malik is quite used to spending public money and corruption.

With the police and CPS firmly in the pockets of the Government, and more than a little scared of MPs, I am not going to hold my breath for a prosecution.

5 responses to “Britain’s first Muslim Minister, turns out to be quite expensive”