Jacqui Smith’s husband apologised to the Home Secretary on the doorstep of the family’s home today after claiming for two pornographic movies on her MP’s expenses allowance – but stopped short of saying sorry to the taxpayer.

This has to be the funniest story I have read in a while, all the more amusing that it is staunch feminist Jacky Smith’s husband! She naturally claimed that she wasn’t there, but you have to wonder. I have known a few feminists who were more than a little relaxed in their views in the bedroom.

That said Jacky Smith doesn’t really strike me as that sort of person. Indeed I (thankfully!) cannot imagine her engaging in sex with a man at all. I wouldn’t be surprised if her kids were conceived through artificial insemination as she probably views sex with a man as some kind of submission to male dominance. 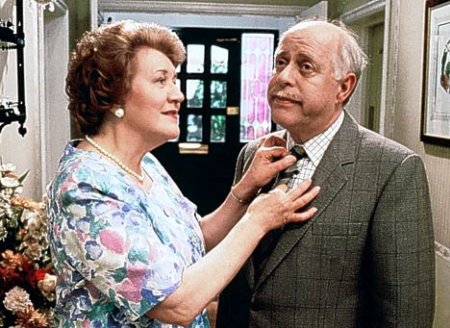 Jacky prepares her husband for work

Not only is Mr Timney a stay at home dad, or house husband, but his wife calls herself Miss Smith, rather than Mrs Timney, just to make him feel even more like the mistress, or the hired help. Jacky also claims to be an ordinary mum of two in an attempt to capture the mum vote, but there is nothing ordinary about her arrangement. She is rarely home and it was her husband that did all of the mother jobs, such as changing nappies and taking the children to and from school.

No wonder he wanted a little late night entertainment, but he is most likely regretting it now.

I am sure that after the whole ‘You’ve ruined my career!’ speech he also got the ‘Women are not sex objects,’ speech. Poor Mr Timney. But this of course begs the question, why didn’t Jacky see the movies on the bill? Surely underneath the film Oceans 13 she noticed Dirty and Kinky Mature Women and Naughty Amateur Night (or whatever he watched)? Does she not check the bills, especially before she submits them to be claimed back as expenses?

You’d think that with her being the main breadwinner she’d take more of an interest in the finances. Then again perhaps she did know about the films, perhaps it was Mr Timney who was absent at the time the movies were viewed and it was Jacky getting her kicks in the second home.

Still, even though between them the pair earn nearly a quarter of a million a year they still can’t afford furniture, and the taxpayer has had to buy them a new dinning table, a washing machine, a home entertainment centre, a tumble dryer, an antique fireplace, coal to burn in it, another washing machine (perhaps the first one didn’t match the dryer?), a cooker, a sofa bed and yes, even a kitchen sink.

This is what I just don’t understand about the expenses system, surely an expense is a cost that is incurred whilst doing their job, e.g. paper for replying to constituent letters, fuel costs for travelling to and from Parliament; I really don’t understand how a kitchen table is an expense of her job? A sink? She needs the sink to do her job? It is ridiculous and immoral. The expense system has become free money, a way to claim for anything and everything with little or no scrutiny or evaluation.

It should be scrapped immediately and replaced with the same system that other businesses use, everything has to be run by the boss before being approved, i.e. us. If they don’t like it, they can find another job.

This entry was posted in Brown, Government, Jacqui Smith, MPs. Bookmark the permalink.