Mentalist on the loose 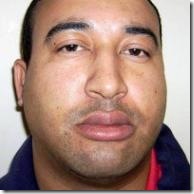 Convicted murderer Paul Caesar is on the run after fleeing a secure mental hospital with a record of high-profile escapes, police have warned.

Fantastic news. Not only is the Government failing to lock up mentalists who may be a danger to the public, they are also allowing those already convicted of murder and supposedly safely locked away, to roam free.

The press release doesn’t give any details of his crime, so we can assume that it was particularly brutal. I am also going to assume that he is no criminal mastermind who has spent the best of the past 13 years planning this escape.

“A spokesman for Springfield Hospital said Caesar failed to return after spending time unescorted in the hospital grounds on Tuesday morning.”

And the above seems to confirm that. The people in charge of that hospital really are idiots, ‘failed to return after spending time unescorted in the hospital grounds on Tuesday morning,’ – I am sure they were very put out, and probably went looking for him to let him know that his breakfast was getting cold.

It is meant to be a secure hospital, not a hotel, what an earth are they doing letting mentalists walk the grounds unescorted in the first place? What kind of a prison allows the inmates to walk around unguarded? Well ones with 100ft high walls topped with barbed wire, not hospitals with only a wire fence to keep the nutter’s in. At least your common or garden prisoner, upon escaping,  isn’t likely to head to the nearest DIY store and purchase an array of knifes before looking for someone to sheath them in.

After 13 years of mid morning constitutionals, I am sure that he had dug a pretty good tunnel. He probably went all the way to France.

I suppose we just wait now for the inevitable headline of some poor innocent brutally murdered by Paul Caesar, followed by the rounds of inquiries and much talk of lessons being learnt.

The same thing happened four years ago when John Barrett brutally stabbed to death Denis Finnegan. At the time a report into the murder stated:

Barrett had been granted an hour’s “ground leave” from the Shaftesbury Clinic, a secure unit within the hospital, but failed to return. The decision to give him that freedom by consultant psychiatrist Dr Gill Mezey was described by the inquiry as “seriously flawed”.

Yet five years on, the staff at the same hospital, under the same trust are making the very same mistakes, all over again.

As Marjorie Wallace, Chief Executive of SANE a mental health charity said at the time:

The problem is that the people in charge of caring for these people think that they know better, as Mr Finnegan’s sister said: “They think they are untouchable – but we’ll make sure they won’t be.”

You can understand her anger, especially as Nigel Fisher, the idiot in charge when Barrett escaped, didn’t even bother to turn up for the report into his cock up; apparently he was busy that day – in his new job.

Yes, amazingly in Britain if you let a homicidal maniac loose, you get moved higher up the healthcare ladder. Nigel Fisher moved onto a position within the Department of Health as an NHS advisor on foundation trust implementation. Quite why anyone would value this moron’s opinion is beyond me, but clearly the present idiot in charge has decided to follow the same career path.

Despite the Finnegan family’s best efforts to bring it someone to task over what happened, nothing has changed, Just like Barrett, Caesar was probably allowed to roam the grounds because staff thought that underneath he was really a nice person and just needed to be shown a little goodwill and trust. Sadly it won’t be one of the staff that gets brutally murdered, but some poor, unsuspecting member of the public who has never heard of Paul Caesar and is simply going about their daily routine.

This entry was posted in Crime, Doctors, England, Government, Mentalists. Bookmark the permalink.

3 responses to “Mentalist on the loose”